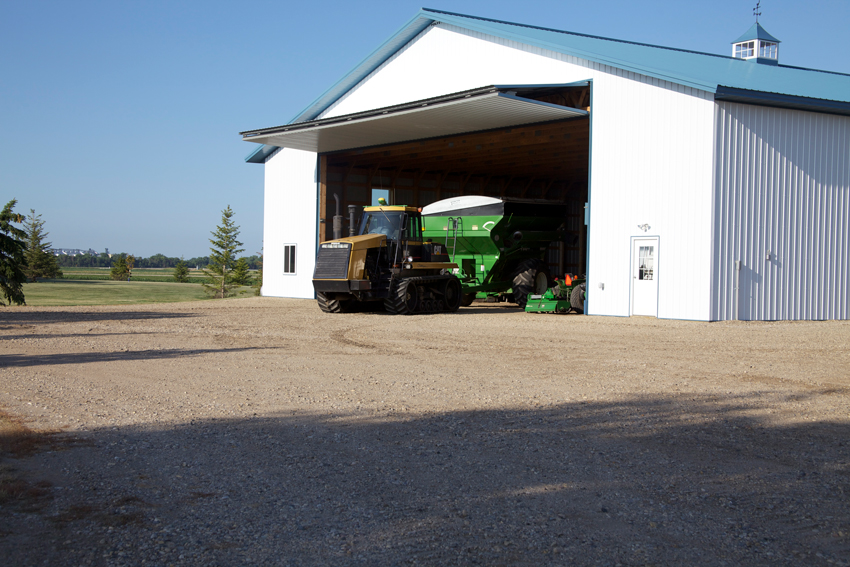 4 Safety Features to Look For On Overhead Doors

Putting safety first opens many doors — especially when making decisions on purchasing large bi-fold or hydraulic overhead doors. Key safety features save owners on costly replacements, as well as prevent potential injuries. Consider these four safety features when shopping for your next door: Safety Sensors Overhead Door Photo Eye It’s important for a door to recognize if an obstruction is in the way as it closes. Choose a door with photo eyes or safety-sensing edges. Photo eyes transmit a beam a few inches off the floor; if something breaks the beam, the door automatically stops and reverses. Safety sensing edges attach to the bottom of the doorframe and cause the door to stop and reverse if something makes contact with them. While photo eyes and safety-sensing edges aren’t new technology, not all doors feature these. The alternative is a door wired to operate only with constant pressure on the push during the close cycle. This is required for any door without photo eyes or safety-sensing edges, but when the operator removes his finger from the push button the door will stop. Safety Switches Unless a door has an automatic latch, a single latch handle needs to be manually released prior to opening the door. Look for a single latch handle that incorporates a safety switch to prevent the door from starting until it’s unlocked. This will save on expenses associated with damage from trying to open the door while it’s locked in place. Some manufacturers also offer optional top override switches. These serve as backup safety switches if the limit switch in the control box fails. When contact is made with the override switch, it stops the door from traveling past its opening height. Safety in Strength For long-term durability, select a door made of all-steel construction rather than a combination of wood and steel. Also confirm that the door’s construction meets the current wind load requirements of the building code. Some older doors may lack strength because they were built according to older building codes based off of lower wind loads. Safety Rating Last but certainly not least, check to see if the manufacturer has a high safety rating. For example, a door with a 5 to 1 safety rating means the cables and straps opening the door can withstand stress that is five times greater than the weight of the door. With these tips in mind, you’ll be well on your way to finding a door that puts safety first. Learn More Or Request a Quote 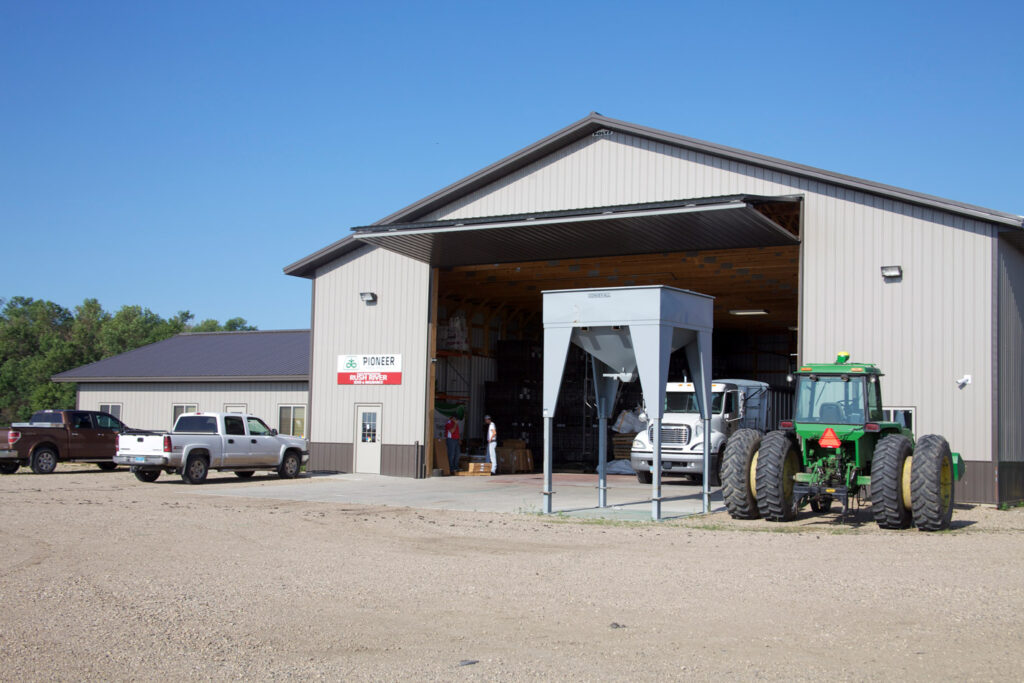 Open the Door to Energy Efficiency 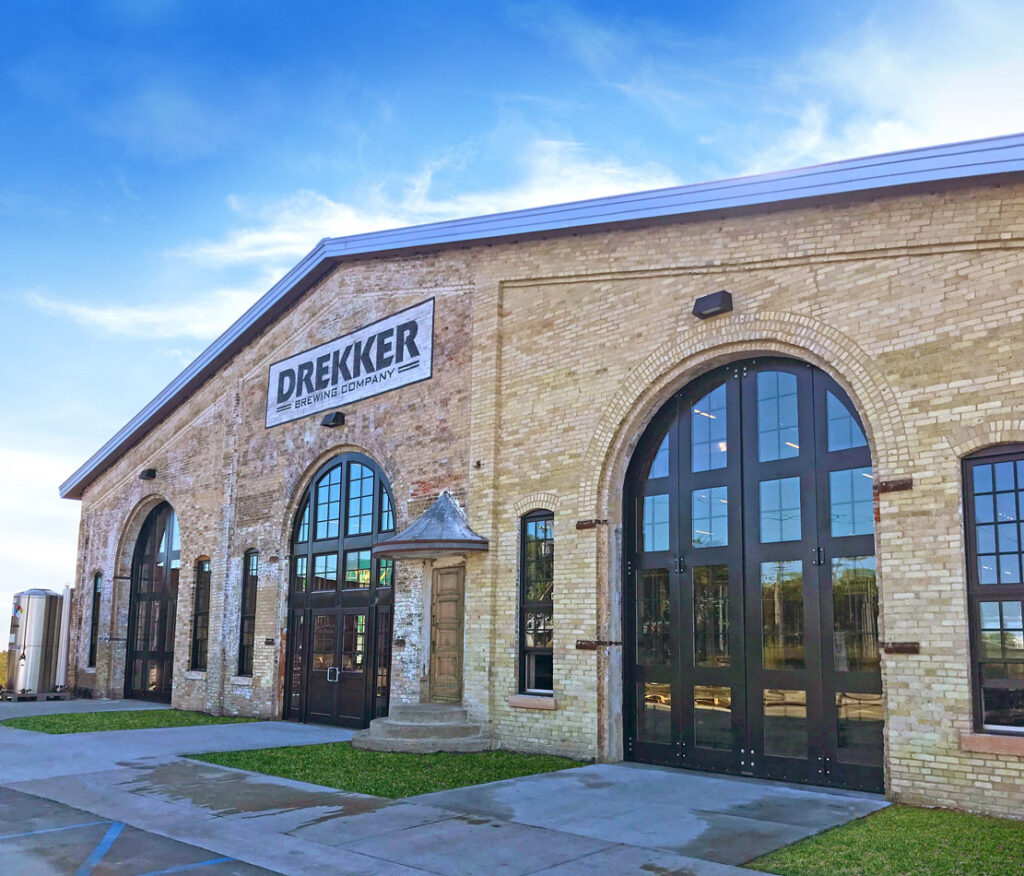 Door manufacturer helps transform a train maintenance building into a beautiful brewery Conversations buzz and beer flows from the tap. In the distance, a train roars past. The train’s presence is subtle and fleeting, but not lacking significance. After all, the building that’s now home to a brewery and taproom spent its early years as a locomotive maintenance facility. Brewhalla is one of Fargo, North Dakota’s latest breweries, and it’s located in a building that’s older than the state itself. Named in honor of their Scandinavian heritage, the team at Drekker Brewing Company opened Brewhalla — its second location — in September 2018. With features heavily influenced by the building’s history and an entrance flanked with sizeable picturesque custom doors, the structure now appears breathtaking and effortless, but the road getting there was anything but. From trains to beer Custom doors by Midland Door Solutions offer the perfect grand entrance to Drekker Brewing Company in Fargo, N.D. The Northern Pacific Railway Company (NPRC) built the 11,700-square-foot building that houses Brewhalla in 1883. It was primarily a foundry and repair building for railcars and locomotives, and later served as a storage and warehouse facility. When Kevin Bartram of MBA Architects purchased the abandoned building, he had a vision in mind. “Kevin always knew he wanted to make this his home and live in the north end of the building,” said Darin Montplaisir, one of Drekker’s four co-founders. “He had envisioned a brewery in the other half of the building, so he approached us and we jumped on the opportunity.” With one Drekker location already established in downtown Fargo, a second location less than a mile away was a no-brainer. “We were running out of space downtown,” Montplaisir said. “It was perfect timing. And we had always thought that building would make an awesome brewery. Everything about it is so unique, and we knew we wanted to move in.” Out with the old, in with the… old Keeping the natural, original elements was one of the key goals of MBA Architects and the Drekker team when they started design in the summer of 2017. Brewhalla’s structure is built with masonry load-bearing walls and a timber wood-framed roof structure. Besides adding necessary structural reinforcements, most of the wood and brick in the building is original. “We were surprised by how much the engineers let us keep,” Montplaisir said. “It was important to us to keep the building as close to original as possible. We love that about it.” Tables in the taproom at Drekker are made from wood recovered during the renovation process. Part of the restoration process was finding new uses for old elements of the building. Some of the original nuts and bolts were used in installing the new wood pieces, and the taproom tables are made from extra wood from the building. Outside, a repurposed footing now serves as a bench beside the firepit. Even the skylights, which line the roof of the building, have an old purpose: they served as smoke shoots for the train exhaust. Old train tracks that were discovered below layers of concrete will be used in a future fixture in the taproom. “People ask us, ‘how’d you get it to look like that?’ about a lot of things,” Montplaisir said. “And they can’t believe it when we tell them that’s the original.” Authenticity played a key role in restoration of Brewhalla. That’s why, when it came to the building’s doors, MBA Architects knew who to call. A trio of showstopping entrances In its early days, trains entered the maintenance building through one of the three large doors along the east side of the building. The openings are now fitted with three custom-designed doors that each serve a different purpose. Each of the custom doors at the brewery measures 12 feet wide by 16 feet tall and weighs 2,300 pounds. The middle door is a standard customer entrance door. The doors on either side of the patron entrance required a fully custom solution and were designed and installed by Midland Door Solutions. The West Fargo-based company specializes in custom hydraulic and bi-fold doors. In addition to architecture and design, they create and install doors for the aviation, industrial and agricultural industries. Customized solutions are Midland’s specialty, so Brewhalla was a perfect fit for their next undertaking. “Unique applications like this allow us to showcase our creativity,” said Jason Myrvik, Midland Door Solutions general manager. “We were excited to take on a local project and work with the customer to create the look and feel they were striving for.” MBA Architects’ team had seen photos of other Midland custom doors, and knew they’d be a good fit for the unique situation. “We performed historic research and found drawings of similar doors in other NPRC buildings,” said James Monson, architect at MBA Architects. “However, we wanted the benefits of modern technologies.” MBA worked with Midland to create a truly beautiful set of oversized doors. They each measure 12 feet wide by 16 feet tall and weigh 2,300 pounds. After several discussions between the architect and structural engineer, the team at Midland proposed a design to MBA and Drekker. They mirrored the pattern and elements of the main entrance door. Heavy, dark lines contrast the windowpanes and pop against the light brick building. “The goal was to mimic the contour of the arches on the openings and custom windows in the middle arch,” Myrvik said. “So we ensured our glass followed the curvature of the arch. We utilized aluminum grids embedded in the glass to create the same look as the mullions in the windows. This helped create a cohesive look for all three sections.” The southern door is a vertical bi-fold door that serves as a shipping and receiving entrance. It’s made with heavy-gauge steel tubing and has a fully automated operating system. The doors open and close quietly in seconds, a critical necessity when the doors are used throughout the day while customers are present. Forklifts bring loads 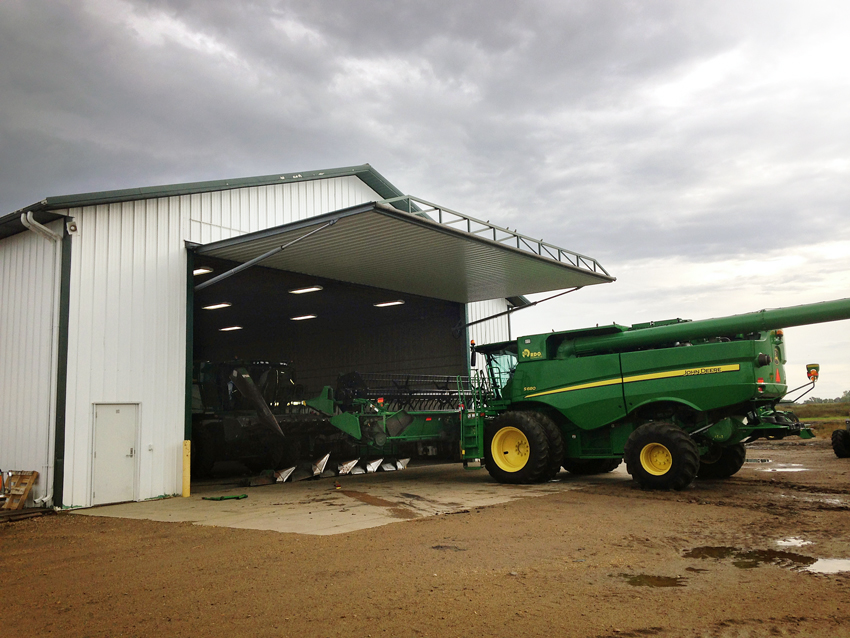 Midland Door Solutions manufactures and installs durable, efficient and fast-opening hydraulic doors for large agricultural, aviation and commercial buildings. The company custom designs all of its doors to fit any new or existing building. 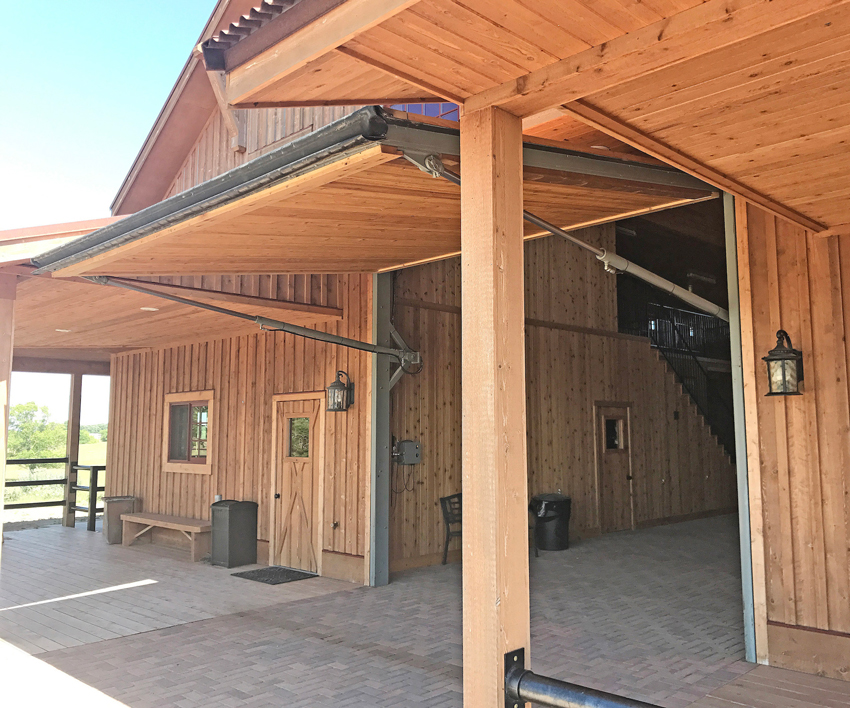 Midland Door Solutions offers custom architectural doors for use in a wide range of buildings, such as barns, hotels, offices, restaurants, stadiums, storefronts and high-end homes. The doors give business owners the flexibility to open up large spans of wall to enhance traffic flow in and out of buildings, or divide interior spaces, such as conference rooms, in an easy and aesthetically unique way.

When And How To Choose Bi-Fold Doors

Sectional overhead doors are the most common solutions for openings, but when does it make sense to install an overhead bi-fold door, and how do you know which one is right? Traditional overhead doors work great for a wide range of buildings, but they have their limits; most can only be constructed as wide as 40 feet. If you have large agricultural equipment, 40 feet may simply be too narrow. This is when a bi-fold door is a better solution. Bi-fold doors feature a unique truss system that keeps them stable to as wide as 90 feet to accommodate some of the largest equipment. 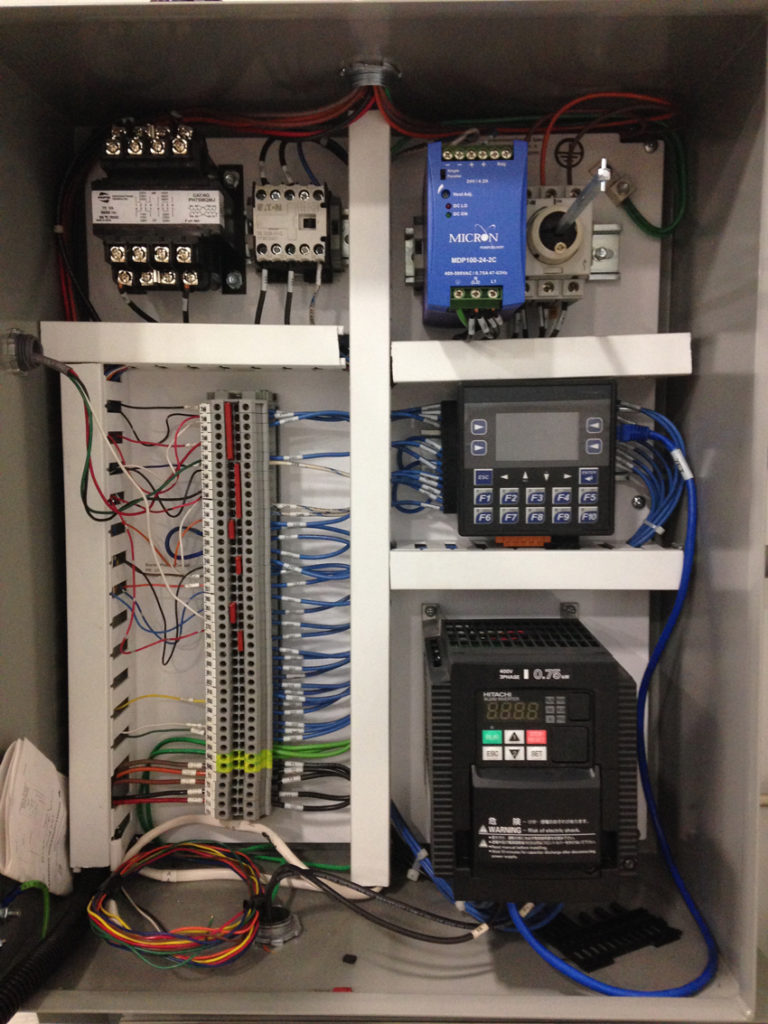